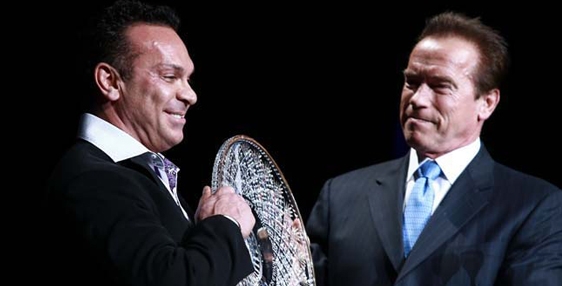 Gaspari, who won the inaugural Arnold Classic in 1989, was honoured with the 2013 Lifetime Achievement Award during the 25th Anniversary Celebration.

“I am truly humbled with this announcement and never would have imagined 25 years ago that I’d be honoured with such an award. I’ve always admired Arnold Schwarzenegger for his contributions to fitness in America, so being presented with this award by him is a dream come true” said CEO Rich Gaspari.

Rich Gaspari has received numerous accolades for his bodybuilding achievements including Mr. Universe, Mr. America, as well as placing 2nd three times in the Mr. Olympia. Off the stage Gaspari was awarded the Ben Weider Lifetime Achievement award in 2009 for his contributions to the fitness industry.

Gaspari has always been a staunch supporter of numerous IFBB and NPC fitness and physique events. He’s also supported numerous athletes over the years including amateur and professional fitness competitors, bodybuilders, endurance athletes, mixed martial artists and traditional martial artists. Much of this support was under the umbrella of his world famous Gaspari Nutrition sports nutrition brand, which has seen rapid growth over the past decade. With hard work and unwavering dedication, Gaspari has made a successful transition from competitive bodybuilder to world famous CEO.