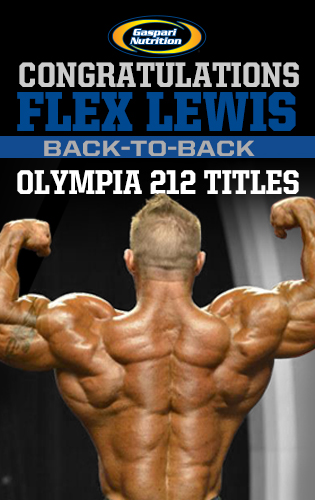 Nutrition Systems Australia and New Zealand’s leading distributor of sports nutrition is proud to congratulate Flex Lewis on winning the 2013 Olympia 212 Showdown title. After winning last year’s event, Flex first displayed his improved physique during the pre-judging round. On Saturday morning, he was the final competitor to perform his posing routine on stage at the Olympia Expo. After turning around to hit a few poses from the back, it was almost a guarantee to the audience in attendance that he would be taking home another Olympia Showdown title. That night, Flex made it official when emcee Bob Cicherillo announced his name over David Henry as 2013 Olympia 212 Showdown champion.

Rich Gaspari of Gaspari Nutrition signed Flex Lewis as the first ever official Team Gaspari athlete when he was just an amateur. Now he is at the top of the 212 division and considered the most popular bodybuilder in that division. He plans on competing in an upcoming bodybuilding show in Prague and at next year’s first ever Arnold Classic 212 division contest.